When I began trip prep for last year's Utah trip, I became very intrigued by tying balanced fly patterns on jig hooks.  It was new to me, but I saw a lot of potential in tying this style of fly for local warm water fish here in Ohio.  As it usually happens, I forgot about the idea for a while until it was recently rekindled.  I had two specific applications in mine.  One is high sticking/dead drifting a streamer for fish in my local Ohio River tributary and the second would be fishing it directly under a floating indicator, much like a small jig under a float.  The latter was my primary usage case because I find fish (usually crappies) often that stick tight to cover and won't move far to eat, and I also wanted the ability to suspend a fly perfectly at a desired depth at a distance when the fish were more lethargic, like during the colder months.  After a little trial and error, I have come to the following recipe for what I call the Balanced VFS Minnow (more on the name later).  One of the keys to this pattern is the Orvis Sparkle Hair, an old flashy favorite of mine.  It has a ton of shimmer and it's a little more supple than something like Ripple Ice Fiber, so even tied in shorter lengths, it moves well in the water. 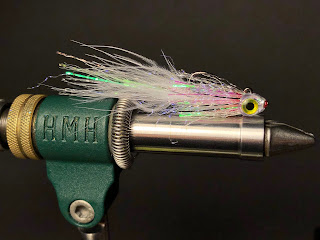 1) Snip about 1/3 of the dritz pin off (the pointy end), slide on the tungsten bead, and lash the assembly down on the bottom side of the hook.  The trick here is getting used to how much length to leave on the pin protruding forward.  I typically end up with the bead back towards the hook eye and leave just enough pin length to attach the flash collar and secure the Fish Mask.  The bead color on these does not matter because it will be covered.  I use whatever I have more of at the time, currently that is black. 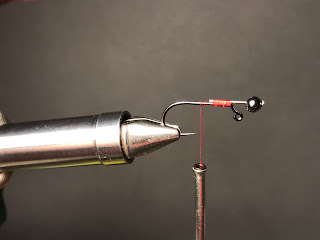 2) Add a marabou tail, tied in long, and advance the thread slightly down the bend.  This is a Lance Egan trick to minimize tail fouling and it does work well.  You can use stripped clumps of marabou off the side of the feather, or use the tip of the feather, but don't make the tail overly bulky.  The tail on mine usually ends up slightly longer than the length of the hook/pin assembly. 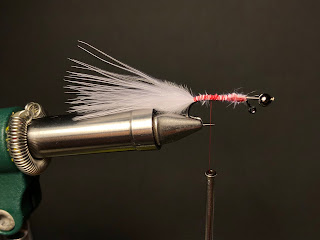 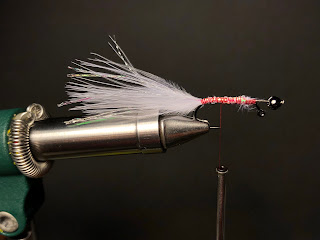 4) Next, dub the Ice Dub thickly onto your thread and dub a body up to just before the bend in the jig hook.  I use UV Pearl Ice Dub on this example.  The body does not have to be pretty because it's going to be brushed/picked out shortly. 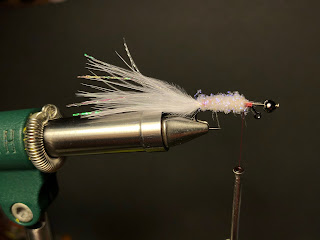 5) Dub the remainder of the hook and one wrap onto the pin with UV Red Ice Dub.  This will serve as a hot spot or gills effect, so you can use whatever hot color you want...or leave it all pearl.  Do a couple of crossing x-wraps over the bead to hold it in place against the red dubbing.  You can see how much space I have left for the collar and mask now. 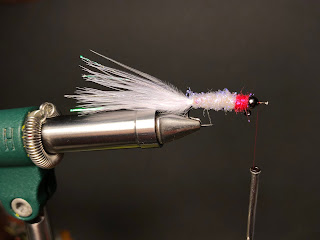 6) Use a piece of Velcro or a tool like a Stonfo dubbing brush to pick and brush out the Ice Dub.  Don't be afraid to get aggressive with the brush. 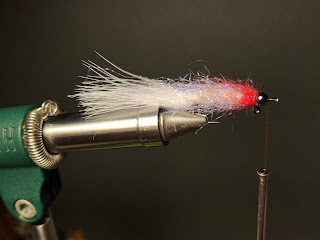 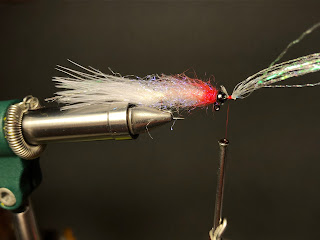 8) To gauge how much to trim, pull the fibers back over the fly.  I trim the bottom of the collar at the back of the hook bend.  Once you trim it, stroke the fibers back forward. 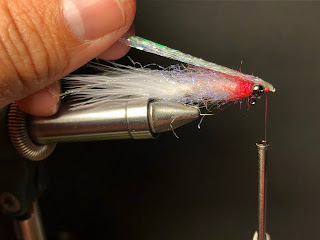 9) Repeat the process on the top side of the pin, this time with a contrasting color.  In this example, I am using Emerald Rainbow Sparkle Hair.  If you want a solid color fly, you can just use pearl on top and bottom. 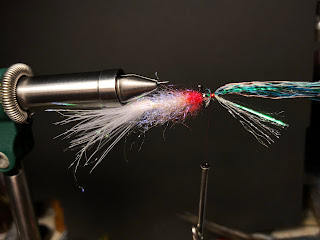 10) To trim the top of the collar, stroke the collar fibers forward and trim the top portion slightly longer than the bottom, roughly 1/8" longer.  If you leave them too long, they are more prone to fouling around the hook point. 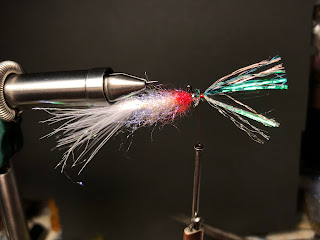 11) The size 4 Fish Mask will need a slight modification to work.  In order for the mask to fit around the hook eye, use a sharp pointed pair of scissors and notch one side of the Fish Mask as shown below.  The notched side will go up on the fly. 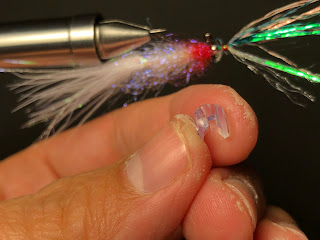 12) Always test fit the Fish Mask before adding some CA glue to it.  The notch should allow room for the hook eye to fit and be accessible for tying on the fly.  If you are satisfied with the fit, add a drop of gel CA (super glue) to the bottom of the Fish Mask, push it on, and secure it in place with several wraps of thread in front of the mask on the tip of the pin.  The flash collar should be evenly swept back by the Fish Mask. 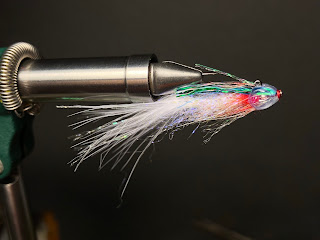 13) Add 3D 4mm eyes to the Fish Mask with more CA glue.  I also like to "armor" the front of the fly with some Hard as Nails, coating the thread wraps and front of the Fish Mask.  The Balanced VFS Minnow is ready for action. 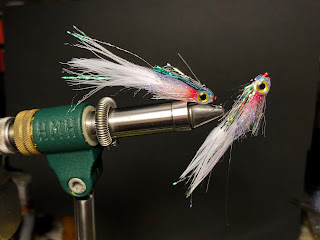 In testing the pattern so far, I have had equally good success dead drifting/high sticking the fly through likely fish holding water and fishing it suspended under an indicator at distances where I can't high stick the fly.  With this size fly, a size small Thingamabobber floats it perfectly without sinking.  A situation I often find in my area is fish holding really tight to cover and being unwilling to move far from it to eat.  Even a weightless fly cast tight to the cover can't stay there and suspend for long before it has to be moved or stripped, or it sinks.  With this minnow pattern under an indicator, it can be left there literally for minutes if you want to just hang it there.  A deadly method I have found with this setup is casting over a sunken log, dragging the fly back over the top and letting it fall to the suspended depth under the indicator right next to the log.  Crappies have found it pretty irresistible.  I obviously wanted this fly to have a lot of flash and bling, so that's where the "VFS" in the name originates.  Visible From Space. 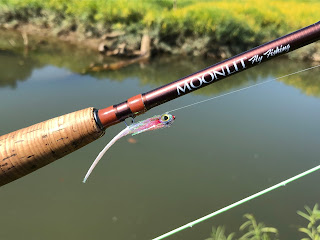 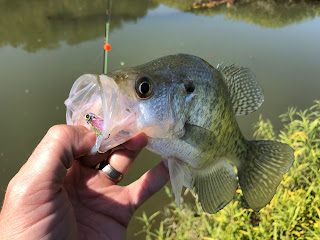