I've had a lot of requests for a video on this pattern, and I finally got around to knocking it out.  This streamer has been a stone cold killer for me since I first started tying it.  What I was going for was the flash and profile of a Murdich Minnow in a weighted form.  The jig hook and dumbbell eyes pair perfectly, and the Ice Dub body is great for flash and the illusion of volume.  It's flashy, gaudy, a little excessive...but the fish love it.  The Murdich Jig Minnow claimed over 2/3 of my trophy citation fish in Ohio last year.  Enjoy!


Posted by Bobcat Hollow at 5:13 AM No comments:

Probably my favorite fly to fish for panfish on local waters, when the fish are willing to rise, is a simple foam spider.  It's an extremely simple and effective fly.  The only problem I have ever had with this pattern is that it's not buoyant enough to float even a light dropper fly.  When I fish the spider and see fish near the fly but refusing to come to the surface, I want a dropper but am forced to switch flies or use an indicator to suspend the dropper where I want it.  The original foam spider I have used a lot in the past looks like this. 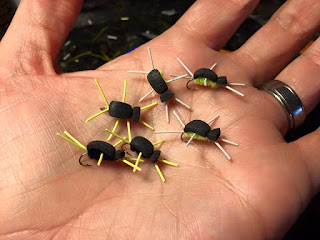 The thin piece of foam on the back of the fly floats it well right in the surface film and the wiggling legs prove irresistible to a lot of fish.  I toyed with multiple ideas to bump up the flotation on the foam spider, and I feel I finally have the pattern down the way I want it.  It floats incredibly well now, the fish still eat it, and it can support the weight of a small bead head dropper fly.  The recipe is as follows:

Begin by tying in the rubber legs to the front, over the hook eye.  I prefer to double a single strand over the thread, tie it down, and fold the legs forward, covering the base of the legs with thread.  The legs should separate naturally under thread tension. 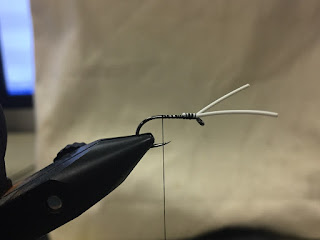 Not 100% needed, but I like to add a red hot spot tag to the rear.  I fold a small clump of Laser Dub over the thread and tie it down.  Trim the tag to end at the length of the bend of the hook. 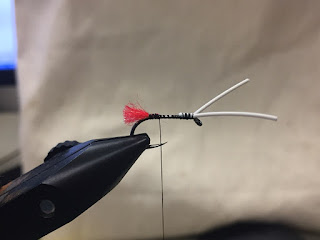 Next add the rear set of legs.  Again double the strand of round rubber leg over the thread, tie it down, and cover the butts rearward.  It's ok if these legs stand upright a bit because the foam will force them down. 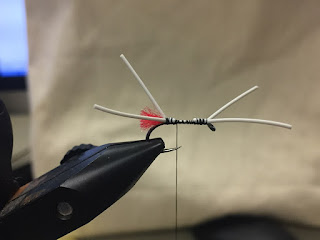 Tie in the strip of foam, ending with your thread at the base of the tag and legs. 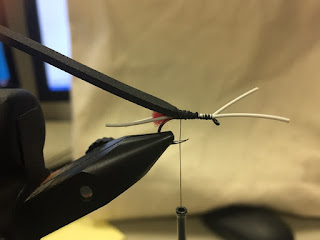 The foam strip should be about the width of the hook gap.  I start with a strip about 3" long, and use all but what you see left here (the small chunk is leftover). 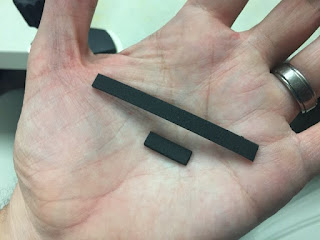 Fold the foam strip forward and tie it down with tight thread tension.  Your thread should stay at the same point on the hook, at the base of the tag/legs. 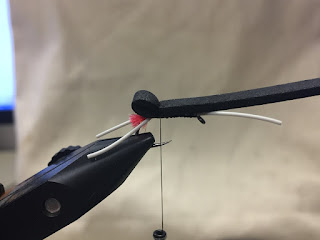 Dub some Ice Dub (I used chartreuse) onto your thread and wrap it tightly up against the base of the folded foam piece. 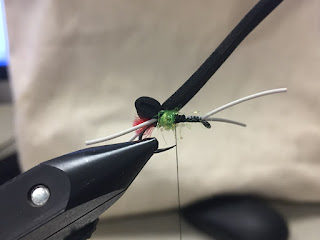 Fold the foam strip rearward again to create a second fold of foam body and tie it down tightly.  Continue wrapping thread to the hook eye, lashing the foam down securely. 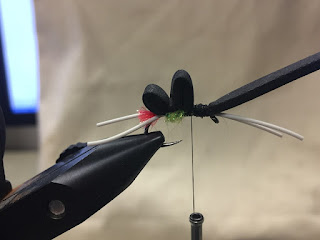 Tie in the legs to each side using a couple of firm wraps to anchor them in place. 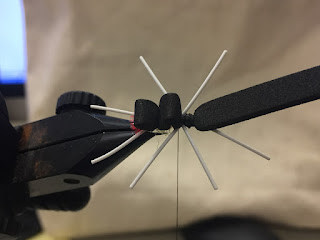 Dub around the legs, using the Ice Dub to prop the legs out and split them.  End with your thread near the hook eye. 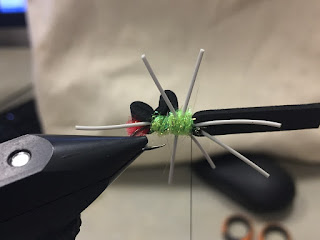 Fold the foam back on more time and capture it with your thread behind the eye, forming a little foam head on the fly.  Trim the leftover foam strip to be about the length of the middle portion of the foam body. 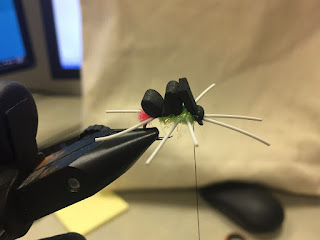 Next tie down a small chunk of foam at the same tie in point for the head.  I prefer orange foam, and a small chunk is perfect.  Even  small piece of bright orange is very visible at a distance on the water.  Whip finish behind the hook eye and trim your thread. 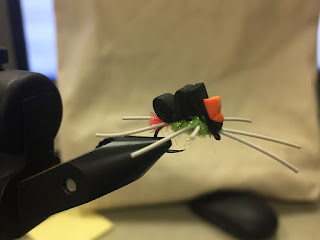 Lastly, trim the leg length to your desired length. 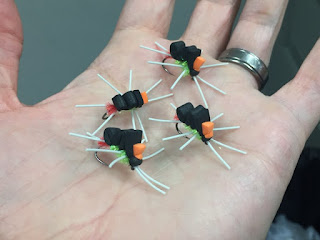 Early testing in the tank with this fly has shown that it floats exceptionally well and has enough buoyancy to float a small bead head dropper (like the Nothin' Special).  Doubling the foam over twice allows for more foam to be packed onto the hook without making the fly too large.  By my estimation, tying the foam in using this method gets roughly three times the amount of foam onto the hook.  I fully expect this bug to get annihilated by bluegill once the weather warms and the fish start moving shallow.  It's a simple fly with materials most folks will have lying around their tying space.