This past weekend I made a somewhat unexpected/unplanned trip to eastern Tennessee.  Ordinarily, I'd like to have a week or more to prep flies for even a weekend trip like this to be sure my boxes were stuffed with all I might need.  I can admit that I usually tie a lot more than I ever need, but it's what I do.  Unseasonably warm weather was expected that weekend so I had high hopes for a good weekend of fishing.  As usual, the major flows in the area did not disappoint.

My fishing buddies were already in the area, having left the day before while I had to work and attend to some family matters.  The alarm clock went off at 4AM Saturday, and after a quick bite to eat, I was on the road by 4:30AM.  Packing the car the night before helps for a speedy exit in the morning!  I was in Tennessee and meeting up with my fishing buddies by about 9:30AM after a pretty smooth trip south.  We decided to take advantage of the favorable wading schedule and hit the Watauga River all day Saturday.  I tend to fish these rivers in two ways: 1) dry/dropper on the shallower and flatter water and 2) a tandem nymph rig in the deeper and faster water.  I picked up a few fish early on the nymph rig, including a gorgeous wild brown.  I always use 12' leaders in this area, and this time even dropped down a size smaller on the tippet from 6X to 7X. 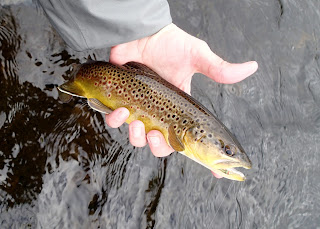 As we moved downstream from our starting point, we came to a familiar section with some shallower water and lighter currents.  I quickly rigged what was my money setup all weekend, a #18 BWO Klinkhamer trailed by a #20 olive/brown midge on a short dropper.  The action on the midge was fast and furious, with fish in every juicy looking run and seam eating them with reckless abandon.  I also managed a few fish on the dry, but 90% of the fish ate the midge. 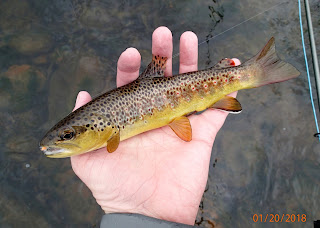 After catching several smaller trout, I had another classic take on the midge, pulling my indicator Klinkhamer under the surface.  With 7X I was pretty tentative setting the hook, and immediately knew I had a better fish on that was going to require more finesse to land.  I got the rainbow in the net after one failed attempt, and it was my best fish of the trip.  The rainbow went about 16.5" in my measure net.  If you look really hard you can see the teeny midge in the side of its mouth. 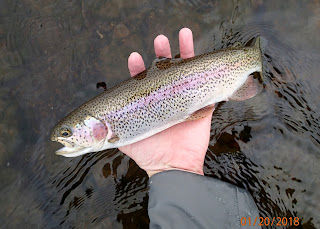 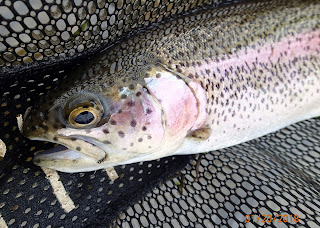 The following day was unfavorable for wading the Watauga, but the South Holston had a generous wading flow and became our destination.  We all planned on leaving the area shortly after lunch, so we hit a familiar section where we could park close and maximize our time on the water.  I began the morning in some deep runs with pretty swift current, and picked up some fish on a tandem nymph rig.  Both a Frenchie and an Iced Hare's Ear caught fish for me. 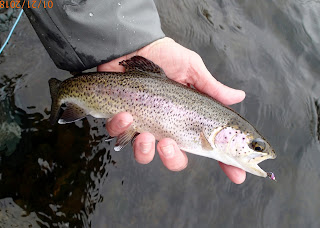 Returning to some flat and slow water, I found a load of rising trout.  From what I could tell, the fish were on some BWO's that were coming off the water steadily.  I returned to the same dry/dropper rig as the day before and was surprised to see the fish preferring the midge to the BWO.  It turned into a spot-and-stalk, practically.  Spot a fish rising, give that fish a 2-3' lead and the fish would take the midge about every time. 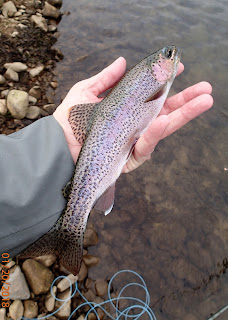 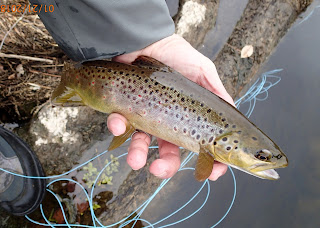 As the morning turned into the afternoon, I finally broke off my last olive/brown midge.  It was perfect timing because it was time to eat a quick stream side lunch and hit the road.  The night before, while enjoying some music and brews at Jiggy Rays in Elizabethton, we ordered a large pie with pepperoni and banana peppers to go.  We managed to avoid diving into it Saturday night and finished her off for lunch before starting back home.  As always, I washed down lunch with a cherry Dr. Enuf. 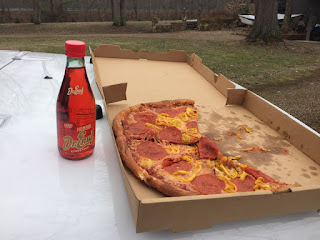 Typically I do not enjoy fishing light tippet.  OK, that's a lie...I deeply resent and hate it.  But, the proof is in the pudding, and I caught a lot of fish on this trip.  I felt I did better than I typically do fishing 6X, so maybe the drop in tippet did help.  Here's a closeup of the fly that did most of the damage.  It's an extremely simple zebra midge pattern with one simple twist, the single strand Krystal Flash tail.  This color combo is referred to by the South Holston Fly Shop as the "Olivia Midge." 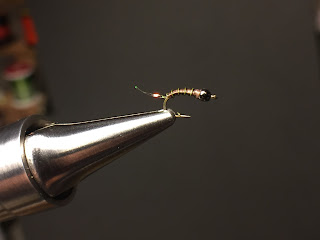 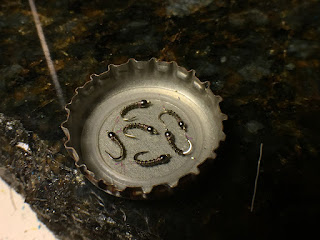 As always, if you're headed to eastern Tennessee to fish the tailwaters, keep a watchful eye on the release schedule using the TVA app for your smart phone, or checking the TVA website.  When the dams are generating water, wading is not usually the safest option.  And remember, there are more than just tailwaters in the area.  If wading conditions can't be found on the bigger water, check out a smaller freestone stream in the area and you'll also find fish.