During the late summer of 2016, I discovered a somewhat hidden public pond close to home that I thought deserved a trial outing.  I had no expectations, and only carried my Moonlit glass 3wt.  I assumed there would be some panfish and maybe some small bass and this rig could handle it.  The first sign that this could be a waste of a trip (my fishing time is valuable, I don't get much of it) was the wall of briers and brush I had to wade through just to reach the pond. 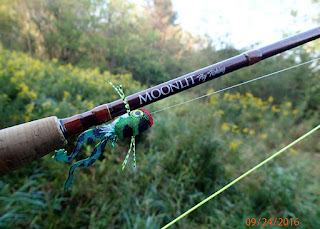 When I reached the pond, I immediately saw a large swirl near the bank close to me.  In my head I thought, "Well that couldn't have been a bass. Maybe a turtle or a catfish or something." To be honest, I don't know what that bog swirl was, but now I think it was probably one of the resident piglet bass with whom I have come to form a love-hate relationship.  That day I saw multiple very large bass around the pond and I was in no way prepared for that. 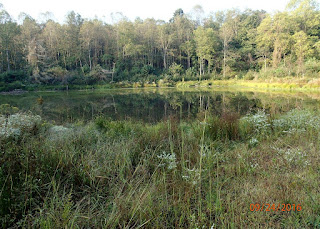 Using the flies and gear I had with me, I did land a lot of healthy sunfish that day.  However, even while I was catching these fish, I was already plotting a return with appropriate gear to try and tangle with one of these green beasts cruising the shorelines. 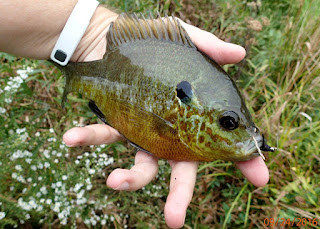 The return to the pond happened a week later on another stellar late September morning.  I brought the same 3wt as the first trip...but also a 9' 7wt to throw serious meaty flies in hopes of hooking one of those bass.  Remember how I said it was a wall of brush that had to be navigated to reach the water?  Here's some pictorial evidence of just how overgrown the trek to this little body of water was that fall. 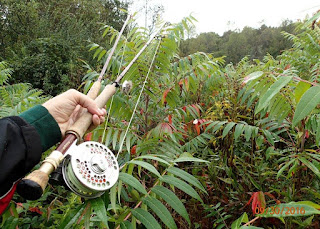 Starting off that morning, I fished a deer hair mouse and quickly found some willing rodent eaters.  I landed a few smaller bass, then had a large shadow chase down my mouse only to refuse the meal at the last second.  To say I was deflated would be a massive understatement.  I could see the fish coming hard at the mouse, kept it moving, and was mentally prepared for the eat...only to have it not happen. 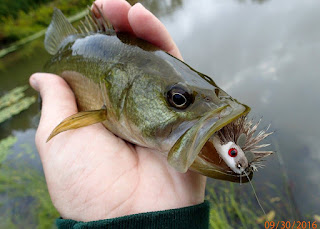 Later that morning I had switched from the mouse to a large single hook streamer in a sunfish color pattern.  The morning was drawing to a close and my hopes of a big bite were fading when I saw a pair of shadows closing on my streamer from behind. I never felt a thing, I only saw the white insides of a mouth opening briefly and seeing my mostly yellow streamer disappear.  I strip set and my 7wt buckled with the fish diving head first into a woody blow down.  The fight was over quickly and I lost.  The fish wrapped me around wood and broke me off in seconds.  My ass was kicked.

In the spring of 2017 I returned and had some better luck on the resident bass of this little woodland pond.  The only problem, I never hooked one of the really solid fish.  As usual, the bigger fish were highly visible along the shores of the pond but I got refusal after refusal.  I was starting to feel like I had missed my only chance to land one of the bruisers when that fish wrapped me in wood the fall before. 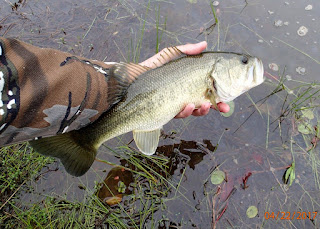 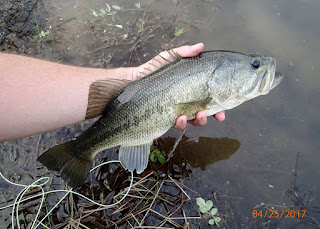 This winter and early spring has been particularly brutal for fishing in SE Ohio.  Heavy rains, high winds, even intermittent snow has made the fishing and the water conditions very difficult.  I made a couple of short trips back to the wilderness pond only to find skittish bass and willing redears.  I managed a few bass, but they were all small.  Sure, I spotted a few big bass, but they were so skittish that landing a weightless streamer within 5' of them from 40+ feet away spooked them off for deeper water. 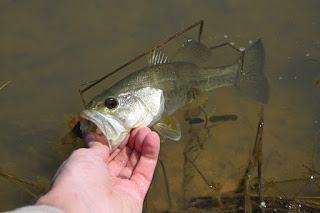 During the past week, I finally had a feeling that water conditions were going to allow better fishing because the overnight low temperatures were steadily climbing.  This had to make fish more active and aggressive, I hoped.  I returned to the pond after work on Thursday night with hopes to turn my luck around here.  The redears were again willing to eat a well-placed dry fly, but the bass were still not cooperating.  Near dark, things changed dramatically.  I had switched to an articulated streamer imitating a sunfish when I made a mid-length cast from a beaver lodge along some heavy cover near the shore.  The take was violent, hard, and I strip-set hard.  There was plenty of cover nearby for the bass to dive into, but I gave the fish no line and hoped the 12lb Trilene Big Game tippet would hold.  The fight was actually short and I got my hand in its jaws when the fish was still pretty green, and it thrashed my thumb pretty hard.  Finally, though, I had victory over one of the behemoths of this little secluded pond. 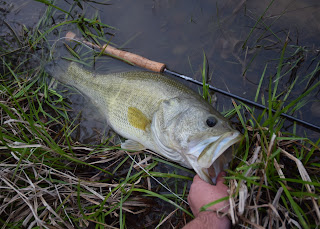 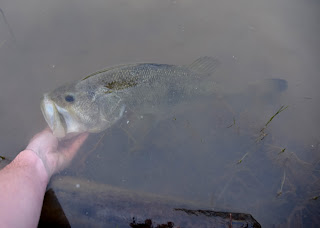 My personal best largemouth had been 21", a fish that I landed a little less than a year ago in a different public pond in the area.  This fish went 22.5", eclipsing my personal best.  Late last fall I had purchased a new streamer rod, a Moonshine Outcast 9' 6wt, and this was just the second fish I have landed on the new rig.  The rod has performed great and had plenty of backbone to keep this fish from getting me into trouble.  What a way to break in a new rod!  I didn't even attempt another cast that night.  I released the big girl back to her haunt and headed for the car satisfied.  Until next time, Miss Piggy. 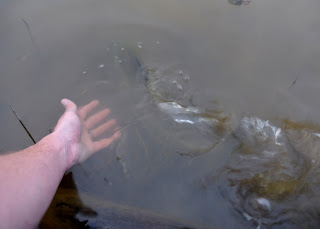 If I am going to be perfectly honest, my early beliefs on tiny fly rods was that there was a very limited place for them in fly fishing.  Several years ago, I recall a fellow Ohioan posting on a message board about the joys of fishing light rods for smallmouth bass and other hard-fighting species and I stopped just short of calling him an idiot.  I think.  I have since apologized, personally, to this individual.  My eyes were opened to the true capabilities of fly rods 3wt and smaller by...shocker...experience using them.  Roughly four years ago I made the most impactful purchase of my fly fishing life: a TFO Finesse 1wt rod with matching TFO BVK Click reel.  My intentions were simply to use it for small stream trout and panfish.  Those intentions changed after a few incidental catches of other non-target species that showed me how capable that little fly rod truly was.

In my experience, the great equalizer in utilizing a small rod like the Finesse 1wt is tippet size.  The biggest obstacle, on the other hand, is wind.  Heavy winds make casting a light rod much more difficult.  My first few trips carrying this rod in a small stream known to have some good-sized carp mixed in with the bass, I strictly avoided the urge to cast at them.  I was confident I could get them to eat, I had no belief I could land one.  It had simply never occurred to me just how much heat could be put on a fish using 4x sized tippet.  4x is not overkill on a 1wt, but at the same time is not really underkill on something like a typical Ohio largemouth or smallmouth bass.  It's a happy medium.  The individual fish that first opened my eyes was this dandy SC largemouth that ate a size 6 Murdich Minnow in plain sight right in front of me.  It was a chance encounter while I was picking off coppernose bluegills.  I happened to have the small streamer in my box, thought "Why not give it shot," and look at how it turned out. 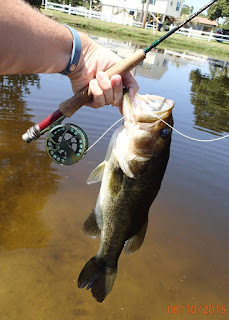 Of course, where this UL setup is truly at home is on small stream trout.  The tight quarters found on the smaller streams, coupled with typically shorter casts and smaller trout, make the little Finesse the ideal rod for this application.  Even a typical 6-7" WV brook trout will put a decent flex in the 1wt, and a larger specimen can give you a great battle.  It's a great setup for dry fly and dry/dropper fishing on small West Virginia mountain streams. 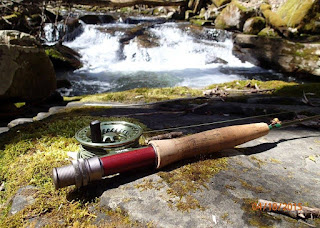 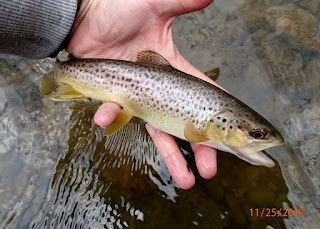 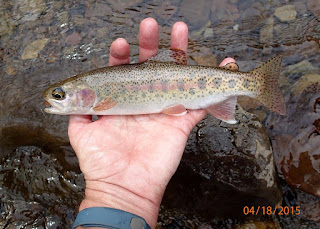 A lot of folks look down on or scoff at bluegill and other panfish as sporting for a fly rod or beneath their abilities, but hooking a slab bluegill on a light rig that can be buckled to the cork might change your mind.  Another little addiction of mine is to feed tiny deer hair bugs to longear sunfish in small streams near my home.  I consider them to be the brook trout of Ohio.  They can have truly stunning coloration and using a light fly fishing rig lets you enjoy their spunk a little more. 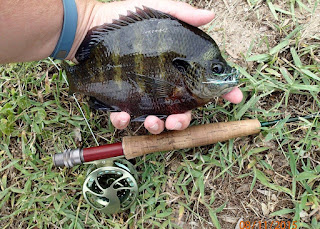 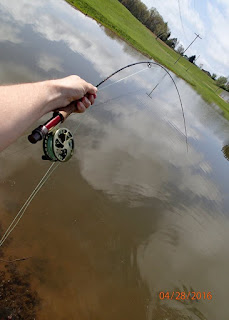 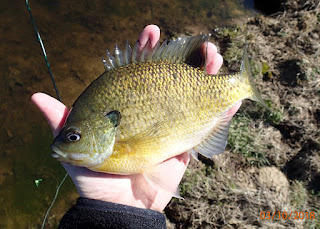 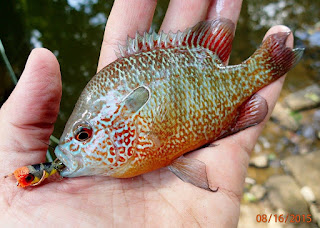 Smallmouth bass?  One of the harder fighting fish I have convenient access to in Ohio?  Smallies up to about 16" have been landed in short order using a tippet size that can handle them and the tiny little 1wt rod, so long as the flies chosen can be cast without issue.  Here's some video showing some powerful small stream smallies buckling the UL rod. 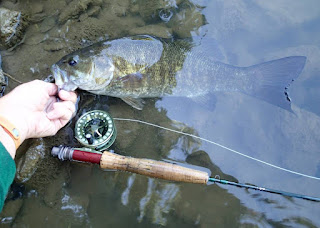 Now back to that fear of hooking a carp on the TFO 1wt.  After lots and lots of real-life experiences landing strong fish on the Finesse rig, I finally decided I needed to see if it could be done.  Could a carp be successfully and ethically landed on this setup?  I have hooked three Ohio carp on my 1wt outfit, and have landed 2/3.  The lost fish was the result of a straightened hook that happened within a few feet of the net, otherwise I'd be at 100% landed (in a small sample size, I concede this).  I also filmed one of the carp I hooked, and here you can see the uncut fight footage and that the fish was landed in a little over 1 minute elapsed time.

The largest of my 1wt carp experiences was a happenstance encounter while smallmouth fishing that previously mentioned small stream.  I presented a fly to a pod of carp that was working towards me, got an eat, and had a Herculean fight with that golden bone.  24" of carp power vs a 1wt and 4X tippet, and it ended in a victory snap for me and a healthy fish swimming off (angrily). 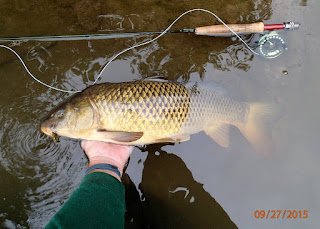 I couldn't have been more wrong about ultralight fly fishing.  Flat-out, dead wrong.  As crazy as it sounds, feeling like you're flirting with losing control and feeling like you're in a fight that you might not win is addictive.  When I hook a carp (even a big one for my area) on my 7wt, the issue of whether or not I can handle the fish is not an issue.  I'll land the fish, it's just a matter of time.  I caught my personal best smallmouth last fall on that same 7wt with 1X tippet and never even put the fish on the reel.  Those are amazing fishing experiences, but I can honestly say that smaller versions of the same species caught on the 1wt outfit were more memorable to me.  A few years back at a fly fishing show in Cincinnati, I told a TFO rep I have practically tried to break this little Finesse rod, and haven't done it.  If you want to get back to pure fly fishing fun, to feeling like you're picking fights you might not win, to casting complete outfits that weigh less than a 4wt reel, give ultralight fly fishing a look.  You might just have your eyes opened to the capabilities of the equipment just like I did, and you'll enjoy the heck out of it.